Most of us have a general understanding of what “battle ready” means for a military service member. All the mental and physical preparation a soldier does prior to a deployment gets them in a “battle ready” mindset. The longer a military service member serves in the military the more difficult it becomes to get out of the “battle ready” mindset, even when not deployed or preparing for a deployment. My experience is in the Special Forces (SF) world, so I will speak of my experiences in that context. During the nearly twelve years I spent as an SF wife my husband, Jim, was in a constant state of “battle ready”. He spent most of his days working out, training, educating himself, angling for, and preparing for the next deployment or temporary duty station (TDY) away from home.

While Jim stayed “battle ready” I began to take on my own version of “battle ready”. Though my version looked different than Jim’s, it was just as significant to the impact it had on us at home. Jim’s version prepared him and took him away from home more times than I could keep track of, but it also did not allow him to fully return home with each mounting deployment. From the beginning of our relationship in 2001 until 2014, when Jim retired, he did four combat deployments of six months or more, two pre-deployment trips to Afghanistan of a month each, spent over ten weeks in Korea conducting exercises with their military, spent nearly a year attending specialized schools, and had more TDYs and Joint Combined Exercise Training (JCETS) than I could list. With each deployment or time of separation, Jim returned physically, but mentally and emotionally we lost a piece of him each time he was away.

As time passed, I distanced myself from Jim. By staying less vulnerable to him, by closing myself off to him, I could protect my heart from the pain of deployments, from the pain of him choosing a career that took him away and kept him with one foot constantly out the door. I also had to protect my heart from the possibility that he might not return at all from a deployment. Staying “battle ready” kept me strong for myself and for my kids. A “battle ready” mindset was not the best thing for my marriage, but it is what kept me functioning, what gave me strength, and what allowed me to take on whatever came next. Even today four years after Jim’s retirement from the Army we both continue to live with a version of a “battle ready” mindset. I still have my walls up in a self protect mode as he continues struggling with being home mentally and emotionally.

Besides the deployments, trips, etc. during Jim’s Army career, I moved nine times (if you count the two times we were stationed in the same place, but had to move to another house). Each move looked a little bit different sometimes I was by myself, sometimes with Jim, and after 2005 always with kids. The constant state of change and adjustment contributed to my own “battle ready” mindset. I did not ever allow myself to get too comfortable anywhere we were. Every house we lived in was a temporary residence. I tried to make each place a home with family pictures on the walls and familiar, comfortable furniture, but it was hard to really get settled knowing the next move could come at any time. It was also difficult to make personal connections knowing they would not last long. 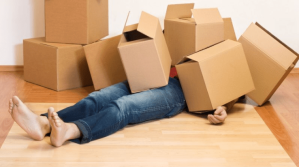 After nearly seventeen years of war our military service members and their families have endured, the “battle ready” mindset has become something of a norm. I believe more support is needed for service members, their spouses, and their children. We need more education and counseling to make reintegration more successful. Mental health issues still carry such negative connotations, and that needs to go away as families attempt to return to “normal” after deployments or even when military careers end. I hope with this blog I can help address some of these issues, and if you are dealing with these issues know you are not alone.

I am a former military wife. I currently live outside of Portland, Oregon with my three kids, a dog, a cat, two goats, and ten chickens. It is my goal with this blog, and several other projects in the works, to provide support for other military wives through my experiences. View all posts by Jodi Mauldin